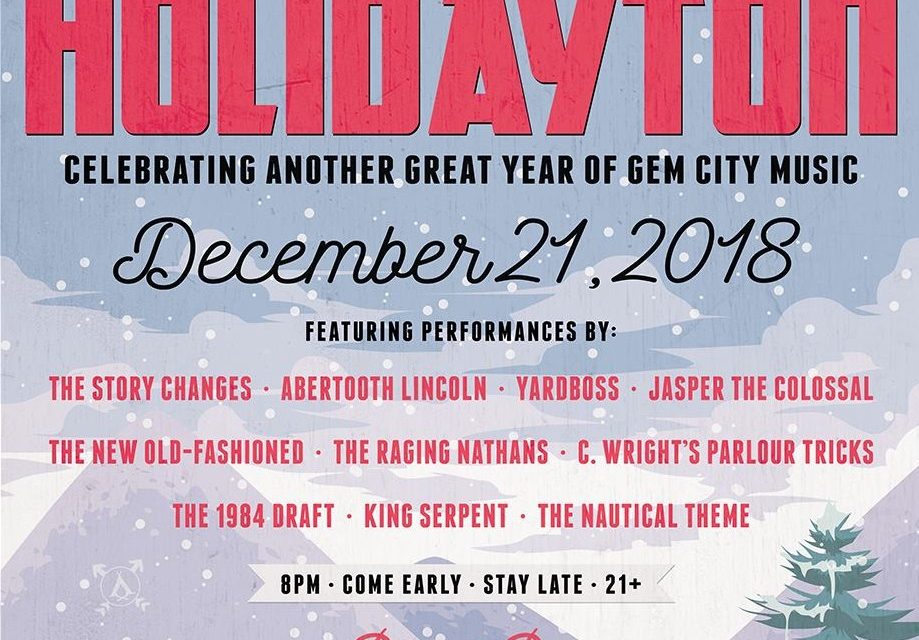 When the holiday season is approaching, the locals in and around Dayton, Ohio, await the announcement of the annual HoliDayton show. This year it was on December 21st and it marked the 16th year of the show that is hosted by the Dayton rock band The Story Changes. As usual, the show was held at Blind Bob’s Bar in Dayton, Ohio, where there is plenty of great food (pickle soup recommended) and great local beer on tap.

This year the bands that played at HoliDayton were The Raging Nathans, The Nautical Theme, King Serpent, The 1984 Draft, The New Old-Fashioned, Abertooth Lincoln, Jasper The Colossal, Yardboss, The Story Changes, and C. Wright’s Parlour Tricks. Each year there are some staple bands that play but there are always some new ones added into the lineup too. The bands are diverse and range from indie to punk. The show is a celebration of Dayton music.

There were two stages for the show so the bands could alternate between them. The Raging Nathans, a punk rock band, played first. They played their song “Dayton”, which shows their pride and love of their local music scene. The next band to play was The Nautical Theme. They are an indie, folk band that played acoustically. Next up was King Serpent. They are a unique rock band that consists of a guitarist and a bassist while using drum backing tracks. The 1984 Draft played next and they have played multiple HoliDayton shows. They sounded great as always. The New Old-Fashioned, an Americana rock band, was up next. For me, these guys are one of the stand outs of the show and they have been for many years. They are polished, unique, and always have a great set. Plus, they got everyone into the holiday spirit with their cover of “Run Rudolph Run”.

With half of the show over, the music just kept coming. Abertooth Lincoln was up next. They are a punk band and they were certainly festive. From holiday lights draped over the drum set to red and white striped suspenders, they were dressed for the occasion. The next band to play was Jasper The Colossal. They are a rock band that plays a lot of shows in the Dayton area and always sound good. Yardboss, a punk band, played next. They have a unique sound, have played a couple HoliDayton shows now, and they are gaining more fans as time goes on.

The next band to go on was The Story Changes. These guys have put together HoliDayton every year for 16 years now. No matter how busy they are or what they have going on, they always take the time to make this show happen and celebrate each year of Dayton music. They played a great set full of some favorites and a couple new songs that have only been played live so far. In the spirit of the holiday season, they ended their set with a cover of “Merchandise” by Fugazi.

The final band of the night was C. Wright’s Parlour Tricks. They are a HoliDayton staple and ended the night of local Dayton music with an all-instrumental rock set.

HoliDayton is definitely one of those annual shows that you do not want to miss. The Dayton, Ohio, music scene is alive and well. There are so many great local bands and there is so much support overall.