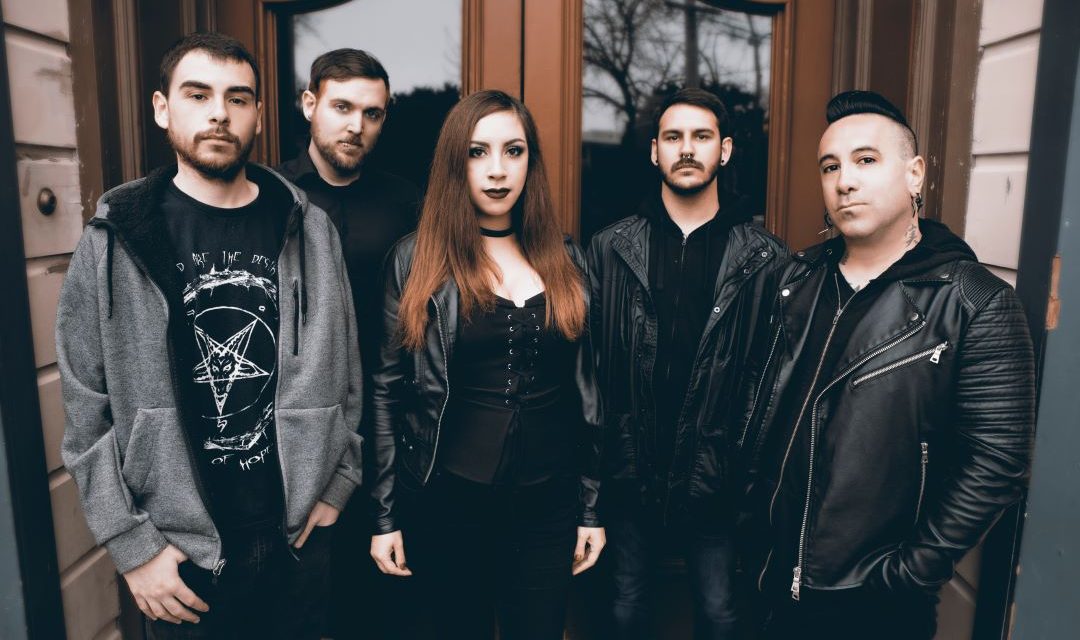 My Immortal Enemy, the new project of Steven Juliano (formerly I AM GHOST’s lead vocalist), just released their new single “Dangerous” on April 22nd. This is the third single off of their upcoming debut album ‘Akuma’, which is slated to be released this year.

Rising from the ashes of I AM GHOST (Epitaph Records), My Immortal Enemy is a metal/rock band with an orchestral flare. The band is comprised of Steven Juliano (lead vocals), Jacklyn Paulette (lead guitar/vocals), Corey Cota (guitar/vocals), Joel Chandler (bass), and Ryan Loomis (drums). Based in Santa Cruz, they are already creating a lot of buzz throughout California. According to the band, they are for fans of Avenged Sevenfold, Beartooth, and My Chemical Romance.

These questions were answered by Steven Juliano, the lead vocalist of My Immortal Enemy.

Q: Your debut single “The Laughing Heart” was premiered by THE NOISE Magazine on March 7th. What is the story behind the song? Why was it chosen to introduce My Immortal Enemy to the world?

A: It was a really tough call. When you’re a new band, the first thing you want to do is show everyone who you are. But we had to choose; do we want the world to hear one of our more faster/aggressive songs first? Or do we go with the “radio” song first? We feel we have a lot of strong music on our debut album, so it was interesting to say the least. But, we felt The Laughing Heart had both things I mentioned going for it. Also, I’ve learned from doing this for so long that you’re not going to impress everyone. Some are really gonna dig what you’re doing. Some not so much. In the end, you just gotta release music you like and enjoy the ride. As to the story behind The Laughing Heart; the entire album “Akuma” is a rock opera… so it’s hard to really pin-point the meaning of this song without giving the entire plot away. But I can say it will all make sense once all 12 tracks are released. We are super excited.

Q: Featuring lyrics like “I won’t let you torment me no more” and “can’t change who you are”, what was the inspiration for your second single “Atlas”?

A: Jacklyn Paulette, the second singer and lead guitarist, wrote the lyrics from this song, and it fit so well with the story of Akuma. She based the lyrics off Mary Shelley’s Frankenstein if you can believe it, and I thought that was totally bad ass. I think sometimes when you get too detailed expressing your songs “meaning” it can have a reverse effect. Letting it open for interpretation can make it more powerful sometimes, cuz everyone can relate to being tormented by someone. Just how so is all relative.

Q: The third single “Dangerous” is bursting with energy and feels heavier like it will be the perfect song to get people moving in a crowd. Can you explain the story of this song?

A: This one is probably one of the darkest lyrically. I wrote the lyrics in a bad time in my life… and I feel we all go through times like these; when you’re so struck with depression that you can’t even get out of bed. I mean, not even to eat. I go through bouts and some weeks are great and I feel fine, and then one morning I will wake up and BOOM; it feels like there’s this dark storm cloud hovering over me and there are no words really on how or why, but you just turn everything off and almost like hibernate. Sometimes it lasts just a day. Sometimes it can go on for much longer. You just gotta be strong and get through those days… because it does get better which I am finally learning after all these years.

Q: All three of these singles are from your upcoming debut album ‘Akuma’, which will be released this year. Why was that chosen as the title?

A: The word Akuma is Japanese for Devil. And the concept of this entire album has to deal with the Devil, but I didn’t want to name the album “Devil” cuz I thought that was a little too cheeseball. I have always been a huge fan of Japanese culture and when I came across the word it just sounded/looked really interesting to me. It’s a bit mysterious as well. And I like that.

Q: What was the writing process like for this album? Was it any different than writing you have done in the past?

A: This was your standard writing process. We took off almost a year from playing any shows and plotted the album; writing over thirty songs in demo format in our garage, recording them all and really sitting down and figure out which twelve were the best fit. It was a slow process because we all had jobs and school and I was driving back from Los Angeles every week working on some films so it was intense. But if you love something you will always have time to work on it. Then, after we nailed down the final twelve we went into a really nice recording studio here in Santa Cruz, CA called “Indigital Studios”. We did twenty-two days straight there with zero days off. We kind of took over the place which was really nice.

Q: ‘Akuma’ was recorded at Indigital Studios, mixed and mastered by Zack Ohren, and the orchestral synth on the album was composed by Ben Isaac. How was the experience of working with them?

A: Zack is a beast of a mixing engineer and has worked with the top metal/thrasher/punk bands around so we went in knowing he was gonna deliver good stuff. We never had a worry that he wouldn’t make these songs really pop. We had to warn him though ahead of time that we weren’t your average metal band… we have complete orchestras in our music created by Ben Isaac. Working with Ben has been an absolutely amazing. He’s one of the most talented people I know and was basically like the 6th member of MIE.

Q: Are you able to tell me anything about the other songs on the upcoming album? As a whole, how would you describe the album?

A: All I can say is that I am extremely proud of these songs. I am proud of the band. It was such a slow process that I am sure some other bands wouldn’t have made it; cuz most musicians just want to play shows and be rock stars, but we had to hold back and really dig into the writing process and kinda go MIA for a while. When you do that, it’s hard because you feel like nothing is really happening, when in actuality it’s the most important thing you can do.

Q: What are some lyrics that stand out to you the most from ‘Akuma’, and why?

A: There’s a song we have (that hasn’t been released yet) called Into the Blue, and there’s this one line that I always strikes a nerve “feel” wise, and it goes: “Is no one listening? Cuz I gotta pocket full of amphetamine in my blood. You know ten long years I’ve been alone infected. Is it too much to ask of us? Will you swim down and save me before I drown into the blue…”  I would rather not elaborate yet on that song until it comes out, but boy does it give me goose bumps.

Q: The music industry has certainly gone through some changes over the years. What do you miss about the way things used to be, and what changes have been positive?

A: Yea, the music world is completely different. It’s not personal anymore… meaning all the bands and fans are kinda hidden behind phone screens and you don’t even know who you’re interacting with online because they can have fake profiles or photos of themselves so you just gotta hope for the best.  I still remember back in the day passing out burned CDR’s and flyers at shows and physically talking to fans or potential fans… shaking their hands and looking into their eyes. When was the last time you left a rock show and saw bands outside handing out their music or flyers? I would say it’s probably zero. Now you push a button on Instagram or Facebook and hope people read your post.

Q: What do you hope listeners gain from your music?

A: I just want people to enjoy our stuff. Simple as that. Whether you’re driving to a job you hate or maybe you’re in your room not feeling so great, you can pop in our album and just feel better for those 45 minutes. If that happens then we did our job. 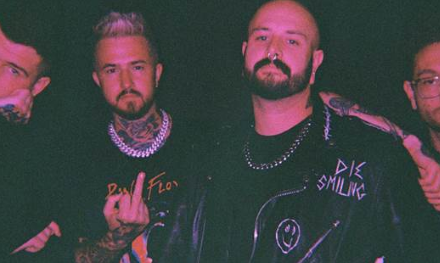 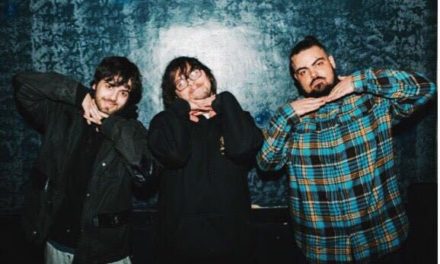 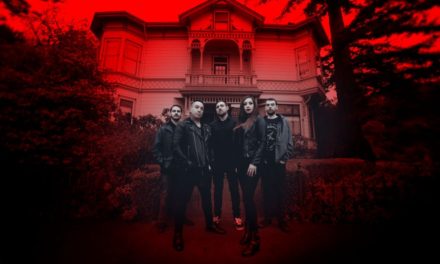 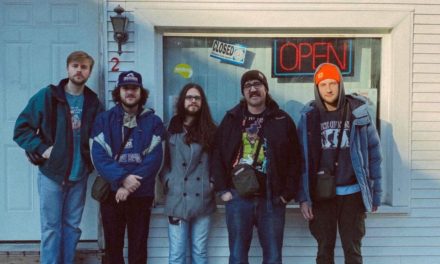