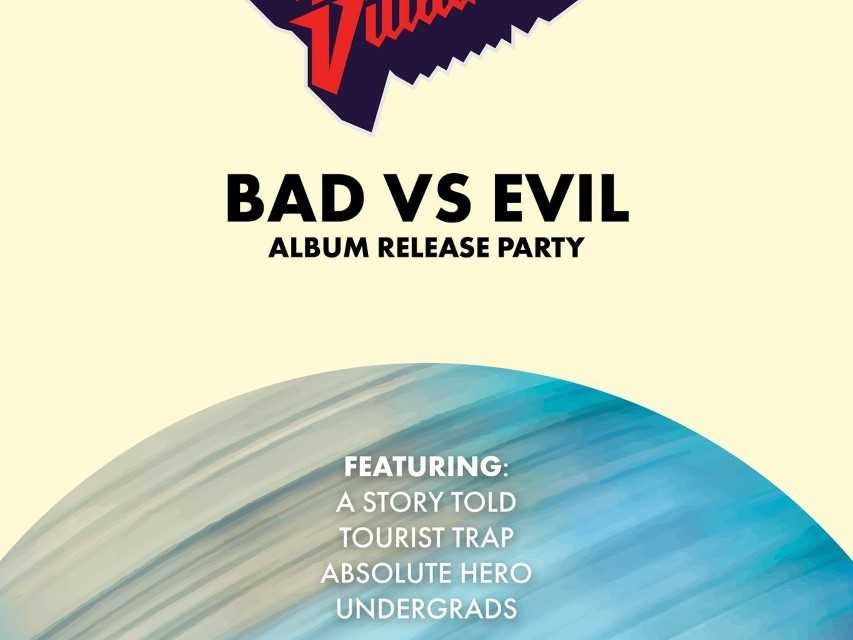 Over the weekend I saw a friend post, “local shows are so much better than big band shows. Fight me”. This is something I have always felt and always will. I myself have always compared local shows to high school and college sports, especially football. I will watch a high school or college football game before an NFL game. Why is this? Well, sports at that level are purer I feel. Those kids are playing because they still love the game and are trying to get to the next level, so they put all they have into it. This is my take on local bands, they are doing what they do because they have a deep love for what they do. This was without a doubt the case on September 7th, 2018 at Woodlands Tavern in Columbus, OH.

Heroes Like Villains have been a band for a few years and in that time, they have built a loyal following here in Columbus and in the Midwest. They have done one tour and a few weekend runs. Their shows have become legendary and this one for the release of their debut full-length did not disappoint. From start to finish it was a great night of music.

The night started with local pop-punkers Undergrads. This is a band I have seen too many times to count. And it is always a good time. On this night they started their set with frontman Johnny Stevens giving a short speech on how shows should be a safe place for everyone in attendance and how Undergrads are not going to put up with groping and things of that nature. Thank you, guys. From there they delivered a blistering set of sad boy pop punk. They have crafted the art of the pop-punk sing-along, as the crowd was very vocal and loud throughout their set. They did, however, announce that this was the last time they would be playing crowd favorite, “Friends”. This writer for one is sad about this. As always, they ended with another crowd favorite, “Pilot”. Next up was local rock band Absolute Hero. Much like headliners Heroes Like Villains, this is a band that has changed up their sound. And with it, they have found their footing. This night was evident of that, I have seen them numerous times but, on this night, they were on their A game. Sarah Nicole’s vocals were right on point. As always guitarist Landen Gruszewski was a ball of energy and joy. I always look forward to seeing him play as he brings so much to every set he plays. The highlight of the set was the chaotic performance of “Death of Innocence”. If you have not heard this song yet, you are missing out. It’s even better live. The passion that comes through from the band as a well is amazing. Tourist Trap is a local alternative band that also released an album this year. They are an upcoming band. And their performances are always solid. This is a unit that has crafted what they do, and it shows when they are on stage. This night was no exception. The next band was the only non-local, A Story Told. This West Virginia pop-rock band are on the rise and are a few tours away from breaking out. If you enjoy your pop-rock with infectious hooks and choruses, then this is a band for you. I legit moved their entire set and I’m not one to dance but every time I see this band, that happens. This was my fourth time seeing them and by far my favorite. I look forward to what the future holds for them.

Finally, the act for which this shindig was for, Heroes Like Villains. Tonight, was the release party for their debut full-length Bad vs Evil. If you are a fan of these guys or know of them and you were not at this show, you missed out. As one that has seen them over 50 times, I can honestly say this was one of their best shows and my personal favorite. They were on point. These new songs were without a doubt brought to life on this night. The crowd responded so well to them. It was like a Donato’s Basement show at times. The entire or 85% of the crowd was jumping and moshing at points. When it comes to pure energy, there isn’t a band in Columbus that can touch them. They even treated us to a few new covers, “Africa” by Toto and “Take Me Home, Country Roads” by John Denver. Both were unexpected and done well. If anyone reading this got video of Country Roads, please send it to me. If that night was any indication about the future of HLV, then wow, they are well on their way to bigger and better things.